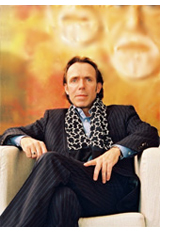 Professor Thomas Druyen is a sociologist, researcher, and best-selling author, who coined the notion of Vermögenskultur in the German-speaking world. He established the first worldwide research initiative for the study of the Social Responsibility of Wealth, and founded the Institute for Wealthibility and Wealth Psychology (Vergleichende Vermögenskultur und Vermögenspsychologie) at the Sigmund Freud University in Vienna, Austria.

Born in 1957 in Süchteln am Niederrhein, near Düsseldorf in Germany, Dr. Druyen studied at the Faculty of Law, Sociology, Communications and Philology at the Westfälischen Wilhelms Universität in Münster, Germany and conducted anthropological research at the University of Colombo in Sri Lanka. He received an MA from the Westfälischen Wilhelms Universität in Münster in 1988, followed by a Ph.D. in 1990 and Habilitation in 2004.

Thomas Druyen has served as Director of the Intergenerational Dialogue Institute at the University of Györ in Hungary, Guest Lecturer at Institute in Culture and Media Management at the free University of Berlin, Guest Professor of Sociology at the Westfälische Wilhelms Universität, Director of the Forum for Vermögensforschung, and Editor in Chief of the Journal for Vermögenskultur. He has worked extensively as advisor to financial, political and industry leaders throughout Europe, and has served as Director of the Demographics Consulting Department at LGT, Germany, the private bank of the Royal Liechtenstein Family.

He has been committed to a number of Philanthropic research organisations, including the Sir Peter Ustinov Foundation in Switzerland, where he worked on the establishment of the Prejudice Research initiative with Sir Peter Ustinov and served on the executive committee of the Foundation. He also continues to serve as Chair of the Board of Trustees of the Kloster Steinfeld Foundation.

Professor Druyen has dedicated his career to leadership in the European framework of Sociological Research. In his research program on Aging and his 2003 book Olymp des Lebens. Das neue Bild des Alter (Lifes Olympus. Towards a New Image of Age), Druyen argued for a major change in our cultures perception of Aging in the context of the increasingly important role that older populations play in contemporary society.

In early 2007, the publication of Professor Druyens book, Goldkinder. Die Welt des Vermögens, caused a stir in German-speaking popular culture, as well as on the academic and philanthropic circuits, culminating in the establishment of the Institute for Wealthibility and Wealth Psychology at the Sigmund Freud University in Vienna, Austria. Other publications include a variety of academic articles and conference talks in Sociology, and several other books, including Die Wahrnehmung der Pluralität. Abschied vom Zeitgeist (Perceptions of Pluralism. A Departure from the Spirit of the Times), and a collection of poems entitled Menschendämmerung (The Dawn of Humanity).

Goldkinder. Die Welt des Vermögens is now being translated into English and will be published under the title Children of Gold: The Social Responsibility of Wealth.